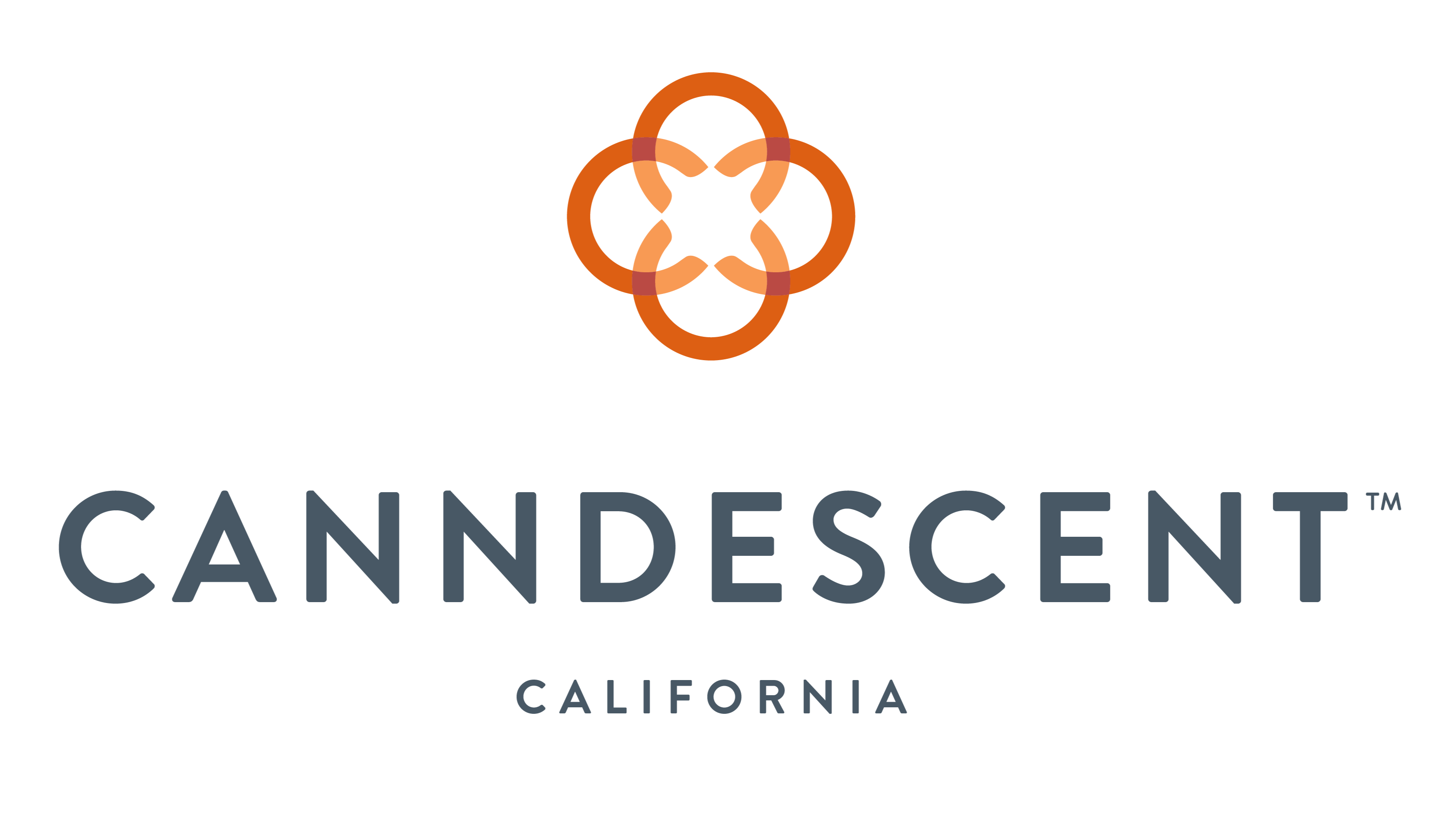 This article was originally published in the Cannabis Industry Journal, May 11, 2021

Flower continues to be the dominant product category in US cannabis sales. In this “Flower-Side Chats” series of articles Green interviews integrated cannabis companies and flower brands that are bringing unique business models to the industry. Particular attention is focused on how these businesses navigate a rapidly changing landscape of regulatory, supply chain and consumer demand.

Canndescent is a vertically integrated flower brand based out of Santa Barbara, CA with grow operations in Desert Hot Springs. Having opened the first municipally-permitted cultivation in California, Canndescent has pioneered luxury branding in the cannabis space with a focus on user friendliness. They were the first cultivator to market cannabis using effects like Calm, Cruise Create, Connect, and Charge rather than the strain name. Canndescent also recently launched a social equity brand, Justice Joints, with 100% of all profits going to cannabis-related expungement and re-entry programs.

We spoke with Adrian Sedlin, CEO and founder of Canndescent to learn more about his transition from tech to cannabis, how he thinks about product positioning and the company’s motivation for getting into Justice Joints. Adrian founded Canndescent in 2015 after being approached by his brother-in-law who ran a legacy cultivation operation. Prior to Canndescent, Adrian was an entrepreneur and worked in startup turnarounds.

Aaron Green: How did you get involved in the cannabis industry?

Adrian Sedlin: I started looking at the industry from a professional perspective in 2015, and once I came to understand how cannabis affects the endocannabinoid system, I became absolutely fascinated by the opportunity to build a world class cannabis company that prioritized consumers. Particularly, I became interested in the adult-use market because I see cannabis as an automobile compared to the horse and buggy of alcohol. Cannabis is a superior adult use solution from a health and society perspective, yet, the entire positioning of the industry at the time was sub-prime, non-aspirational and inaccessible. With Canndescent, the core idea was to counterprogram the existing paradigm and deliver cannabis in a way that was beautiful. To bring the power of the plant to more people, we had to reposition the category and simplify the shopping experience. Moreover, there were too many unsolved consumer problems. For example, in 2015 people said cannabis was a commodity but any stoner knows there are as many dimensions to consider as there are with wine. The opportunity to deliver consumer solutions in a nascent industry that desperately needed advocates while helping to improve the world was enough to get me out of retirement.

Green: Just curious, what was your background prior to cannabis?

Sedlin: I’m a lifelong entrepreneur. I started my first company when I was still in college. After graduation, I ran that business for another four and a half years, sold it, and went back to business school and got my MBA. After Harvard, most of my career was spent in early-stage growth companies, turnarounds and pivots. When someone had $10 million invested in an enterprise or their company wasn’t growing at the rate they wanted, that’s when my phone would ring.

I was lucky enough to shepherd a number of companies to a successful exit several times. During my professional journey, I’d taken a year and a half off between 2004 and 2006, and then pre-cannabis in 2015 I had taken three years off and was getting a little itchy. I didn’t think I was permanently retired; I was just sort of waiting for the next thing to get excited about. And cannabis definitely was the first time I can say in my life that I finally understood what I was put on planet earth to do.

Green: I understand that Canndescent was the first municipally permitted cultivator to open in California?

Sedlin: Desert Hot Springs was the first city to legalize cultivation, and we were the first ones to operate in the city.

Green: How did that come about?

Sedlin: The city had conditional use permits, but a lot of people were trying to do ground up builds. We decided to do a retrofit of an existing facility. So, we were the first ones to get the regulatory permit and cultivate in a way that was truly compliant with MCRSRA which eventually became MAUCRSA.

It took lots of tolerance for ambiguity and incredible patience. There’s an off-putting expression that goes, “pioneers take the arrows.” Well, we took a lot of arrows along the way. A perfect example is within our first year of operation, the fire department sent us five cease-and-desist orders to turn off our CO2. Not because we were doing anything wrong, but because they changed their regulations and then they wanted us to immediately comply as opposed to giving us a transition period. You just got to learn to roll with it. I’d say anyone who got into the regulated cannabis market early – and there’s a bunch of us who are still standing – you just learn to roll with it, be patient and yet, apply boundless energy and passion to the process.

Green: Did you know you wanted to be in Desert Hot Springs? Or did it just turn out to be the permit that was the easiest to get?

Sedlin: That was a binary choice for us. The simple choice for Desert Hot Springs was that it was the only choice. We were doing a professional execution. We were taking investment dollars, and I couldn’t have any ambiguity of being in the gray market. This was before adult use legislation passed in California, so we were functioning under California’s Medical Cannabis Regulation and Safety Act (MCRSA). The only way to be compliant with MCRSA at the time and be a medical cannabis cultivator was to get city-based permission or county-based permission, and the first region to authorize that was Desert Hot Springs. From our team’s perspective, wanting to build a truly compliant company from day one, that was the only choice available.

Green: I understand your facilities are powered by solar?

Sedlin: We have several facilities. One of them is a greenhouse that has light supplementation. We have an indoor facility that is powered by solar. When we opened the facility, it didn’t have a solar project on it. After we opened it, about a year and a half later, we did this full solar retrofit. We found the solar panels offset 38% of our energy consumption.

Green: Your product marketing is effect-forward. How did you come to that positioning for the brand and for the products?

Sedlin: The idea is to simplify life for consumers and unburden them from having to understand the 6,000 different strain names that are out there which have no consistency from cultivator to cultivator.  Before Apple popularized the graphical user interface for computers, the standing orthodoxy among engineers at the time was that everyone should have to learn how to code. Everyone who wanted to use a computer needed to go through the mind-numbing MS-DOS process. But computers didn’t scale that way. Apple’s genius is that it built technology to serve humans with a GUI and didn’t put humans in service of the technology. Similarly, you shouldn’t have to learn 6,000 strains, 100+ terpenes and 100+ cannabinoids to make your first purchase. Our goal has always been to put cannabis in service of consumers as opposed to having the consumer in service of cannabis.

To be clear, Apple doesn’t dumb things down. Apple makes things easier, so that more people adopt them, so those things can then get better. And, that’s really how we’ve always viewed it. At the end of the day, I’m not sure if a consumer needs to know that he or she loves AK-47 when one can understand loosely, “How do I want to feel? Am I trying to relax? What am I trying to achieve?” It’s about prioritizing the consumer over the engineer, or in this case the cultivator or breeder, who covets naming rights. We operate with a consumer-centric philosophy and our company is in service of the consumer.

Green: You have a social equity brand called Justice Joints. What was your motivation for that line?

Sedlin: We have the luxury and privilege of participating in a legal cannabis industry, but there are many people who were never afforded that choice and suffered a steep cost.  With this in mind, we need to put our dollars and sweat into helping communities most impacted and marginalized by the war or drugs and doing our part to address some of the damage.  Justice Joints (JJ), our brand where 100% of the profits go to cannabis-related social equity and expungement programs invites the cannabis community, dispensaries and consumers to vote with their dollars for a better world. “Here’s a vehicle where 100% of the profit goes to cannabis related social justice causes. Are you in? Or are you out?” It gives consumers a platform where they can participate in positive change with their dollars.  It’s what the plant is about.

JJ was the right answer for Canndescent because we wanted to build a self-sustaining economic engine for social justice. We launch world class cannabis brands so building one for social justice was the right choice for us and provided a way for all 250 of our employees to give back and feel proud each and every day.  Justice Joints isn’t a side project; it’s hardwired into the daily activities of Canndescent and will hopefully evolve into an industry-wide, give back platform.

Green: What’s one thing in the world that you want to change or inspires you the most?

Sedlin: The thing I’m most interested in professionally is popularizing the practice of gratitude into the broader business and social fabric. Canndescent is the first company that I know of to incorporate gratitude as a core value. We do so because we believe that happiness is a mindset and a choice, not an outcome. It’s not how many likes you get on your social media, or how much money you make. It’s how you frame your experience to yourself that makes you happy.

On any given day, there’s 100 things I can bitch about, but that just becomes poison ivy that itches and that would make me angry, frustrated and depleted. Living and acting in gratitude, we can move our minds to a peaceful and productive place where we have control and can be our best self for those around us. For example, I just lost my dad on Thursday but I’m focused on gratitude not sorrow. My dad was awesome, died peacefully at age 89, had a 60-year marriage, and loved and gave love. Naturally, there is sadness, but instead of sinking into that, I focus on the blessing of him and meditate on the good. Operating from a happy place, I’m freed up mentally to be there for my mom, sister, wife, children, employees and investors.

So that’s what I’m passionate about. It’s not so much something I want to learn about as much as it is something that I want to cultivate in the world. There would just be more happiness in the world if humanity exercised the muscle of perspective–gratitude. It’s the greatest time in human history to be alive. To listen to the world around us, it’s natural to forget that. But, I’ll take Covid-19 over the Black Plague and Spanish Influenza anyday. “Yes, shit happens, but are you a shit talker and complainer, or are you the type to say, let’s clean this up.” It’s a choice. Canndescent wants to project light and build a world of gratitude.

Green: That concludes the interview, thanks Adrian!

Work with us to help you solve your product development problems and grow your business.

BE ONE STEP AHEAD -